Arterosclerosis is the main cause of heart attacks and strokes, and is in itself a result of other causes, such as cholesterol, hypertension, diabetes, smoking and stress. Transcending turns out to have a significant positive effect on all these causes at the same time, as you will discover on this site, and it is therefore no surprise that is also affects the consequences.

Scientific research of the highest quality has confirmed one exceptional effect.

Just as is the case for hypertension and diabetes, the research on the effect of TM on atherosclerosis is exceptional, and for 2 reasons:

1. It shows an exceptional result: a significant reduction of atherosclerosis without any change in lifestyle, just 20 minutes of TM practice twice a day

2. This result is confirmed by research of exceptionally high quality, in collaboration with the National Institutes of Health in the U.S.

The National Institutes of Health (NIH) of the American Government is one of the most prestigious medical research institutions globally. The NIH has spent over 24 million USD in support of research on the effects of Transcendental Meditation. It has supported TM research for over 20 years, and for one simple reason: Transcendental Meditation works, and it’s the only thing that really works.

General wisdom exists stating that it is very difficult to reverse atherosclerosis, and that it requires a drastic change of lifestyle, as well as medication, which brings along a lot of side-effects.

However, two American NIH studies have shown that atherosclerosis can in fact be reversed in a fully natural manner, simply by reviving the healing intelligence of our own body. There are no associated adverse side-effects, and even a good number of positive side-benefits, such as improved general health and well-being, increased intellectual capacity and improved relationships, etc. 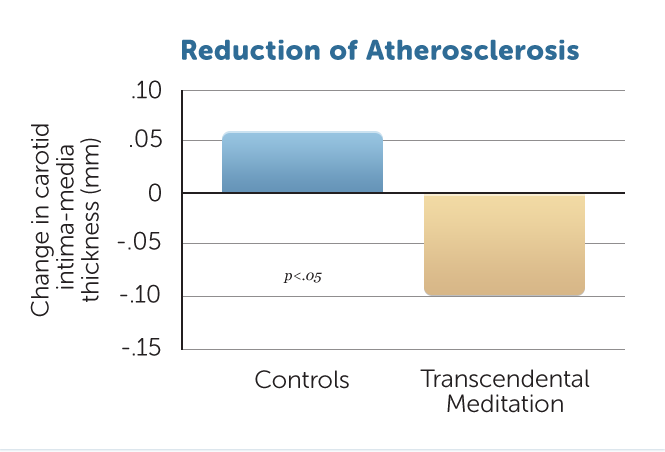 In the first study, 60 test persons were randomly assigned to either a TM group or a control group receiving health advice based on a diet and physical exercise. The TM group noticed a significant reduction in atherosclerosis (narrowing) after 6 to 9 months, whereas further narrowing occurred for the control group. The reduction of 0,1mm was comparable to what may be achieved through a combination of medication and a drastic change of lifestyle.Ref.Stroke 31: 568–573, 2000. Full article on atherosclerosis

But when they combined Transcendental Meditation with other methods of Maharishi Vedic Medication, the effects were even bigger. A later NIH study randomly divided 57 test persons into 3 groups, a group learning TM while also taking a Maharishi Ayur Veda supplement by the name of “Amrit Kalash”, a group receiving health information on the importance of maintaining a healthy lifestyle, along with a vitamin supplement, and a control group. All three groups were moreover further divided into sub-groups of normal healthy people and sub-groups showing increased risk for cardiovascular diseases. Researchers were unaware which individuals belonged to what group.

Transcending works, both preventive and curing

Curing is fantastic, prevention even better. The biggest risk factors for arteriosclerosis are high blood pressure, smoking, insulin resistance (diabetes), cholesterol and chronic stress. All of these dramatically improve as soon as patients go through the experience of transcending through regular practice of the Transcendental Meditation technique. To that extent the TM technique works preventive, if the cause disappears, the consequences disappear.

The NIH study has amongst others led to Dr. Mehmet Oz, the world’s most famous doctor and most influential heart specialist, fully supporting the Transcendental Meditation technique. (see video America’s most famous doctor supports TM). In the video Dr. Oz discusses the effect of TM on 3 big risk factors for atherosclerosis: high blood pressure, high cholesterol and diabetes.