The body has an amazing power to heal itself, as long as we give it a chance to activate this power. This is seen to striking effect when TM is used to treat Post Traumatic Stress Disorder (PTSD).

Post Traumatic Stress Disorder is normally considered incurable because most of the stresses involved are rooted deep in the psyche, beyond the reach of most therapeutic methods. And still, recent studies suggest that the impact of these stresses can be reduced significantly and, sometimes, rapidly, with the practice of TM.

Like many of the effects mentioned on this site, the effect on PTSD appears to be unique to the experience of transcending. Ordinary relaxation does not have the same effect.

This was verified through a recent analysis of 6 high-quality, randomized controlled studies, where the effectiveness (effect size) of 3 TM studies was compared to the effect of Mindfulness. The results are striking. 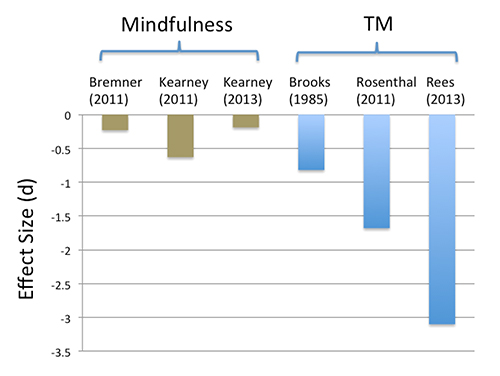 The three studies covered in this analysis are described in more detail below. Below, you can find a beautiful video from the David Lynch Foundation which shows how the practice of Transcendental Meditation helps those who need it most. VIDEO??? 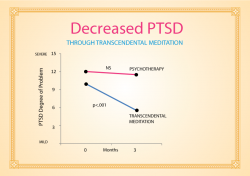 The TM group showed a very significant improvement in all of the areas researched within 3 months.

The improvement was so significant that, after 3 months, 70% of the patients required no further treatment and were allowed to go home. The psychotherapy group showed no significant improvement in any area. (???click on graph to enlarge).

A recent study showed even better results. When a group of war veterans with severe PTSD participated in an experiment on Transcendental Meditation, they showed 50% less PTSD symptoms after only 8 weeks, as well a significant reduction in depression and an increase in the quality of life index.Ref.Military Medicine (juni 2011) These kind of results had never been seen before.

Although this was only a small-scale pilot study, it was published in the professional journal Military Medicine (June 2011) and reported in several media, including CNN (watch CNN video). As a result of these studies the Pentagon has now commissioned a $2.5 Million large scale study to research the effect on a much larger population (with better results after 30 days of TM practice than they have ever seen before) and Norwich University, the oldest military academy in the US, has introduced TM as a standard part of the training.

However, the psychotherapy group showed no significant improvement in any area. If the Transcendental Meditation technique can be used for patients with severe symptoms of traumatic stress (these patients were war veterans), then, perhaps, it is safe to assume that it is effective to treat anyone whose symptoms are not so severe or deep-rooted.

Here is a video of one of the participants in the research study. It’s an interview with the mother of the soldier, describing how TM saved her son’s life. VIDEO???

In April 2013 the journal, Journal of Traumatic Stress, published an even more remarkable study showed that Congo refugees with severe symptoms of PTSD (as a result of rape or other war violence) were completely free of PTSD symptoms after 30 days of TM practice. The improvement was stable after 4 1/2 months. The control group showed no improvement.Ref.Journal of Traumatic Stress 26(2), 295-298, 2013 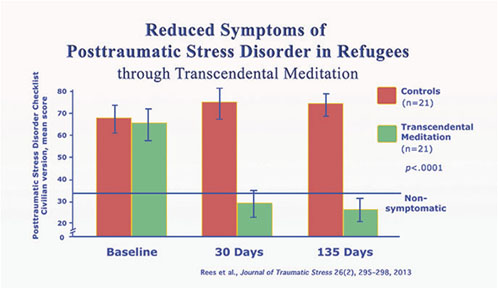