Transcending: The best investment for business and industry

The success of a company in this case depends on two factors, the managers and the employees.

The quality of managers lies primarily in the brain. 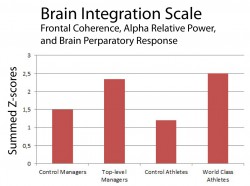 What is the difference between a mediocre manager and a top manager. An interesting study showed that the difference ultimately lies in the brain. Top managers have a much higher score on standardised tests that measure brain efficiency than mediocre managers. This may sound logical, considering that efficient functioning is linked to everything that makes our brain so special; creativity, more planning, emotional stability, etc. A similar difference was also noted between average athletes and the world’s top athletes.Ref.Scandinavian Journal of Exercise and Sport, 1, 32-41 The difference lies, more than anything else, in the brain. 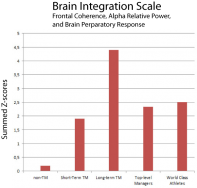 The Transcendental Meditation technique is a very effective method, perhaps the most effective ever researched, to create significant improvement in brain functionality. (how and why? See intelligence) This is demonstrated by a similar study, in which a control group that did not practice TM was compared to a group of short-term TM practitioners and a group of long-term practitioners. (Click to enlarge the graph). More than 30 studies have been published about how the effectiveness of brain functionality is improved through the practice of the Transcendental Meditation technique. Several studies also demonstrate how this leads to an immediate improvement simultaneously in several areas for managers in corporate life. (see research companies)

The following observation is an interesting example of what can happen when Transcendental Meditation is implemented in a company. The company in question is a mid-size factory in the chemical sector in the US. The graph shows that as the number of employees learning the TM technique grows, productivity increases and the number of sick leave days reduces. 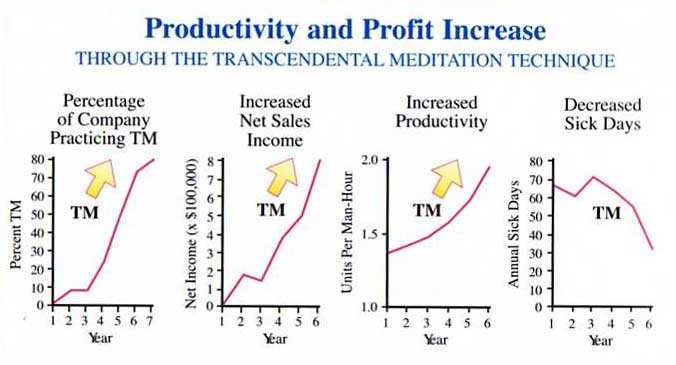 Although this was a purely observational study, it was clear to almost everyone in the factory that these results were caused by the Transcendental Meditation technique.Ref.G. Swanson and R.Oates, Enlightened Management: Building high performance People

More and more businesses around the world are starting to implement the TM technique. Every company wants to increase their capital.

What top managers say about TM

Of all the methods I have tried, Transcendental Meditation is the one that appeals to me most because it is so simple and because the results are already so tangible after a short time of practice. My ability to concentrate has increased. I find solutions to my problems more quickly. I have more strength to deal with unpleasant matters at the same time that I am able to handle conflicts and difficult collaboration questions in a better way. Life has become simpler and more filled with happiness.

I started Transcendental Meditation when I was a deputy general manager of the educational department two years ago. Now I always feel relaxed and I can maintain equilibrium of mind and stability even when in a strained work situation. This brings a great advantage for me and my work.