2×20 minutes of TM a day demonstrated to have a much bigger effect on reducing cholesterol than changes in diet or lifestyle.

General wisdom states that cholesterol depends on eating habits. However, new research shows that stress plays a much bigger role than previously thought. When the normal functioning of the body is disturbed through accumulated tensions, the chance of high cholesterol increases.

On the other hand, when we activate our body’s healing power through transcending, then this turns out to have a much bigger effect on cholesterol than what can be achieved merely through changes in lifestyle.

Two independent studies have measured the effect of TM on cholesterol. 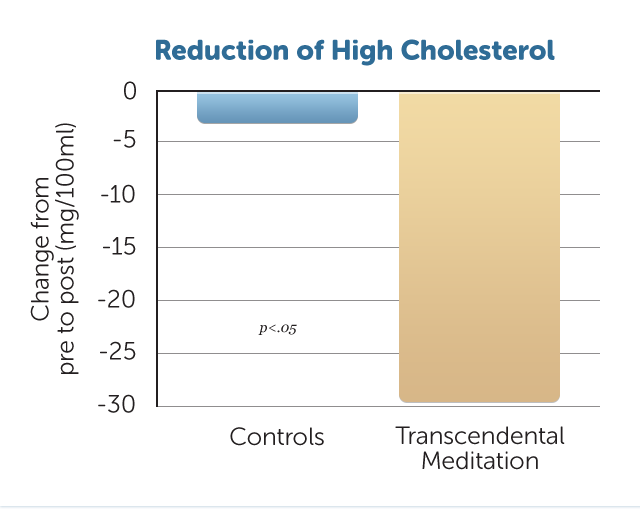 One study was carried out in the Kaiser Permanent Medical Center in Oakland, California, and another one in Tel Aviv University Medical School in Israel. In both studies the total cholesterol level decreased by 30 mg/dl after 1 year of TM practice (p<.005 and p<.001). The control group, who received education around the need to change their eating habits and lifestyle, in order to reduce colesterol, showed no significant reduction. No change in life style or eating habits was expected from the individuals in the TM group, only practicing the technique for 20 minutes twice a day.Ref.Journal of Human Stress 5(4): 24–27, Harefuah, the Journal of the Israel Medical Association, 95(1): 1–2

Dr. Oz: we can only hope to reduce cholesterol by 30 mg through medication.

In a lecture on the effect of TM on the risk factors for heart disease, Dr Mehmet Oz, the world’s most influential heart specialist, stated that we can only hope to ever have cholesterol reducing medication that can lead to a 30 mg reduction. (see America’s most famous doctors support TM) And that doesn’t even take into account all side effects of such medication. For the TM group the reduced cholesterol really only was a side-benefit of much deeper changes in all areas of life, which was expressed also in improved general health and well-being, development of the brain potential, better relationships, etc.

For more questions about the effect of TM on cholesterol, go to: Doctors answer questions: TM and cholesterol 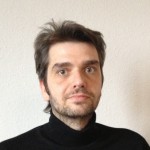 I started with TM to help control my stress, and not at all with the intention to reduce my cholesterol. However, after one-and-a-half month of TM practice my LDL cholesterol had spontaneously reduced from 175 to 159, and overall from 230 to 214.

My doctor was so impressed that he asked if I had made any changes to my eating habits, or had started working out, but that was not the case, it was all TM.