Conclusion of 12 studies with 4000 subjects: TM works, even if nothing else works.

To quit smoking is difficult, very difficult. The addiction is usually deeply ingrained in both mind and body, and most methods to quit have little effect, because they only try to change something on the surface level.

Transcending brings the mind back to its source, the deepest level of our consciousness, and has proven to be very effective to remove the addiction at its origin, for the same reason that it is so effective for so many other problems against which our current methods are powerless (PTSD for example). We bring the mind back home, where it spontaneously feels good again, so we don’t need to smoke to feel good. At the same time transcending activates the body’s own healing power, which enables the removal of the addiction on the physical level. As a result, smokers notice that they completely spontaneously feel less of a need to light a cigarette. They no longer try to quit smoking, rather the desire to smoke just disappears by itself. 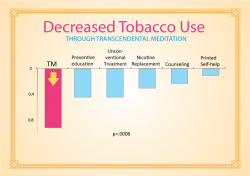 The other methods were subdivided into 5 categories. Preventive education (making people aware of the dangers of smoking), self-help books and leaflets, therapy, nicotine replacement products (chewing gum or patches) and unconventional treatments (acupuncture, hypnosis, meditation and other relaxation forms). The comparison shows that the average effect of Transcendental Meditation is 2 to 8 times larger than all the other methods that were ever investigated. (p = .0006 what is a p-vale?). Click on the graph to enlarge it.Ref.Alcoholism Treatment Quarterly 11: 13–87, 1994

The longer one practices TM, the less the need to smoke

The longer one practices TM, the less one has the the urge to smoke

Just as for alcohol and drug addictions, several studies in the field of tobacco dependence have confirmed the overall experience of TM practitioners. The longer one practices the TM technique, the less one has the need to smoke. 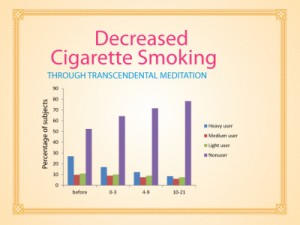 This is clearly illustrated by this large-scale study with 1,862 TM practitioners, conducted by researchers of the Harvard Medical School. (Click on the graph to enlarge it). The total number of smokers among the TM practitioners is reduced by 50% after 10 months. (from ~50% to ~25%) But if we have a more detailed look at the results, we see that by far the largest decrease is in the “heavy user” category (dark blue, with a decrease of almost 80%). This is a confirmation of another general experience with the Transcendental Meditation technique, the effect is the greatest for those who need it most.Ref.Drug abuse: Proceedings of the International Conference, Philadelphia: 1972, pp. 369-376
Note: This was not a study where subjects learned TM with the intention to quit smoking. Researchers just looked at the spontaneous behaviour of the 1800 TM practitioners after a certain period of TM practice. If the subject really has the intention to stop, the effect is usually much stronger. 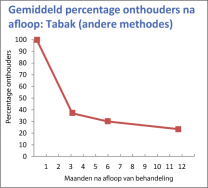 The increasing effect as one practices the TM technique longer is in sharp contrast with all other methods that were researched. The previous meta-analysis shows that of all those who have successfully completed their treatment for tobacco addiction with other methods, almost two thirds have already relapsed after 3 months (from 100% abstainers to 35% after 3 months). After 12 months, almost 80% has relapsed (22% abstainers). This shows, yet again, how difficult it is for a tobacco addict to get rid of his habit and how exceptionally successful the Transcendental Meditation technique is to help them to reach this goal.