Transcending…and even diabetes 2 can be reversed

Transcending removes the most important cause of diabetes.

It’s been known for a long time that the stress hormone Cortisol increases insulin resistance. It has also been known for a long time that transcending significantly lowers Cortisol levels. Transcending brings the body in a deep state of relaxation, activating our body’s own healing power and, amongst other things, spontaneously reducing cortisol. In the long term this reduction will become permanent, as we train the body to permanently function in a more relaxed state. Can TM practice fully cure Type 2 diabetes? That depends on the extent to which the illness has developed, but most important initially is to reverse the process, from a constantly deteriorating to a constantly improving situation, and this simple technique certainly can assist with this.

The research was carried out in collaboration with the National Institutes of Health (NIH) of the American government, one of the world’s most prestigious medical research institutions. The NIH has spent over 24 million USD in support of research on the effect of Transcendental Meditation. It has supported TM research for over 20 years and for one simple reason: TM works, and it is the only alternative method that seems to have a significant effect on all aspects that influence heart disease at the same time: hypertension, diabetes, and cholesterol.

The NIH diabetes study monitored a group of 106 heart patients. They were randomly divided into one Transcendental Meditation group, being taught the TM technique at the start of their study, and a control group, that received health education, with active encouragement to improve their lifestyle. The TM group didn’t change anything to their lifestyle, they just practiced the Transcendental Meditation technique for 20 minutes, twice a day. It was unknown to the researcher who belonged to which group. Insulin resistance and blood pressure was studied within the two groups as part of the metabolic syndrome, a combination of factors causing heart problems and and other health problems. 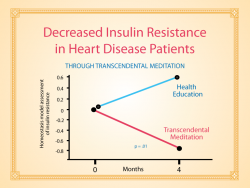 After 16 weeks of regular Transcendental Meditation practice, the individuals in the TM group noticed significant improvement in both blood pressure and insulin resistance (p=.01) compared to the control group, which showed a deterioration despite their changes in lifestyle and increase physical activity. (Click on the graph to enlarge) This study was published by the American Medical Association’s Archives of Internal Medicine, vol 166, June 12, 2006. Read the full publication

Despite the success of Transcendental Meditation in the treatment of Diabetes we always recommend to apply the technique in combination with regular health care. Always consult your doctor.