Transcending and the need for drugs… disappears spontaneously

Conclusion of 10 studies involving 3400 subjects: TM works better than any other method ever studied.

Drug addicts are just people who want to feel good and have become totally dependent on drugs to create this feeling. They know that drugs are harmful, for themselves and for their environment, but the addiction is too deeply burned into their mind. Superficial treatment methods are usually making little difference.

Transcending brings the mind back to its source, the deepest level of our consciousness, and it is very effective to remove the addiction at its roots, for the same reason that it is so effective for so many other problems for which our current methods seem to be powerless (PTSD for example).

We are bringing the mind back home, where he spontaneously feels good again, the feeling the mind was looking for. Then, transcending activates the body’s own healing power, so that the addiction can also be removed on the physical level. As a result, drug users find that they have, completely spontaneous, less need to use drugs. They are no longer trying to quit ; the urge to use drugs is just gradually disappearing.

There are a total of 10 different scientific studies done on the effects of Transcendental Meditation on drug addictions (soft and hard drugs), with a total of 3400 subjects. By comparing the average effect, found in these 10 studies with the effects of all other methods to treat drug addiction that were ever investigated (91 studies for other methods), one can get a very accurate picture of which method works best. 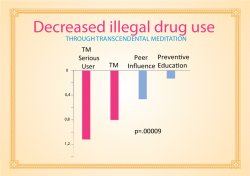 The comparative study revealed that preventive methods can do very little for drug addicts, nor is giving information about the consequences of their addiction solving anything. “Countering peer influence”, a program to deal with social influences, had the greatest effect. However, the average result of Transcendental Meditation on drug abuse was almost twice as large as the one of peer influence and 6 times as large as the effect of all other methods that were investigated (p=.00009 what is a p-value?). (Click on the graph to enlarge it) It becomes even more impressive when one considers the effect of Transcendental Meditation on “serious users”, the heavy addicts (result of some individual studies, not of the comparative study). Here the effect is 3 to 9 times greater than with the other methods. This confirms the general experience that the more dramatic the problem is, the greater the effect of Transcendental Meditation usually is.Ref.Alcoholism Treatment Quarterly 11: 13–87, 1994

The longer TM, the less drugs

The longer one practices the TM technique, the less one will use drugs.

Just as for tobacco and alcohol addictions, several studies in drug addiction have confirmed the overall experience of TM practitioners: the longer the TM practice, the less one feels the need to use drugs. This is clearly illustrated by this large-scale study with 1,862 TM practitioners, conducted by scientists at Harvard Medical School. (Click on the graph to enlarge it). The study was done for soft and hard drugs. 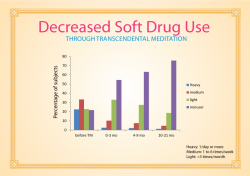 Before they learned TM, nearly 80% of subjects used soft drugs, after three months that number was almost halved (to 45% users) and after 10 months there were only 25% users. But as the graph shows, the declines were especially impressive for the medium and the heavy users, who fell by almost 90% (from 56% to 6%). This confirms once again that the effect of TM is the strongest for those who need it most. 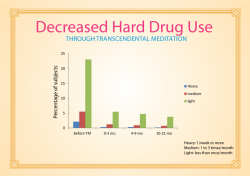 We can see the same pattern for hard drug users, who, after 3 months of TM practicing were reduced by 80%, and after 10 months with another 30% (non-users are not shown on this chart).Ref.Drug abuse: Proceedings of the International Conference, Philadelphia: 1972, pp. 369-376

Note: This was not a study where the subjects were learning TM with the intention to stop using drugs. Researchers were simply looking at the spontaneous behaviour of 1800 TM practitioners after a period of TM practice. If one really has the intention to stop, the effect is usually much stronger. 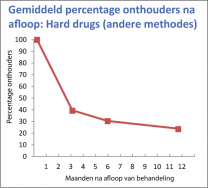 The increasing effect when one practices for a longer time the Transcendental Meditation technique is in sharp contrast with all other methods. The previous comparative study shows that of all those who had their treatment for hard drugs completed successfully, after 3 months already almost two thirds had relapsed (from 100% abstainers to 38% after 3 months). After 12 months, almost 80% had relapsed (22% abstainers). This shows, once again, how difficult it is for a drug addict to get rid of his habit and how successful the Transcendental Meditation technique is with helping him with this.