One of the first things many TM practitioners notice is better sleep. 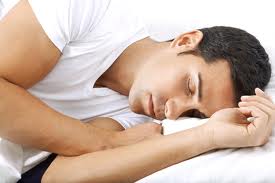 One of the first things that many TM practitioners notice is better sleep. Sleeping disorders can often be related to stress and, today, we are able to provide a more scientific explanation for this.

One of the most common causes for sleeping problems is an abnormally low level of the “happiness hormone” serotonin. Stress is a big influence on this. As the normal functioning of the nervous system is disrupted, serotonin production will decrease. The practice of Transcendental Meditation increases the serotonin level spontaneously and reduces the level stress-related hormones (see transcending = inner peace and happiness), which affects a large number of areas in life particularly the quality of sleep.

When we activate the body’s own healing power (see why is TM so effective against stress?), we may notice that our sleep improves spontaneously. For more information about the effect of TM on sleeping problems, go to doctors answer questions about TM and insomnia.

The first study of the effects of Transcendental Meditation on insomnia was a small pilot study at the University of Alberta in Canada. A group of insomnia patients was asked to register the average amount of time it took to fall asleep, for 30 days prior to learning TM, and for 30, 60 and 90 days afterwards. The average time dropped from 75.6 minutes to 15 minutes and remained stable at that time. (p<.001). A subsequent study showed that also in the long term, after 1 year, the time needed to fall asleep remained stable around 15 minutes.Ref.Scientific Research on TM, Collected Papers vol 1: 41 pp 296-298

A large study, carried out by the Japanese National Institute of Industrial Health, established that 427 Sumitomo Heavy Industries employees that learned the Transcendental Meditation Programme were able to fall asleep more easily after 3 months than the control group of 308 employees at the same work place. (p<.01)Ref. Japanese Journal of Public Health 37 (10 Suppl.): 729